Although we have five senses, it is sight that I consider to be the most important. Humankind has been creating and sharing images throughout its evolution from cave drawings, tapestries, paintings to photos shared on social media such as Instagram and Snapchat.

The written word is a powerful medium but the cliché about a picture being worth a thousand words is as true now as it ever has been. This doesn’t have to be two dimensional either. War paint may have given way to make up and slightly ridiculous facial hair; fur loincloths may have given way to sharp suits via shoulder pads, but it’s all designed to send a visual message.

It’s slightly different in politics but sometimes a clear image says things that clever words never can. The British Empire probably survived for as long as it did thanks to its navy and “gunboat diplomacy”. When local relations broke down the government would simply moor the equivalent of a battleship just offshore. Although there have been some great speeches, it’s often the images that stay with us; the dismantling of the Berlin Wall, the tanks in Tiananmen Square, even Boris on a rope-slide during the Olympics. 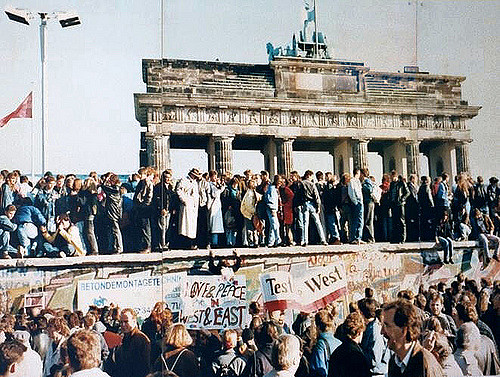 The fall of the Berlin Wall – a picture is worth a thousand words. Credit: Daniel Antal

I read recently that the Exchequer was considering reducing business rates for local newspapers. One of the arguments being posited that it is vital that local public meetings are reported accurately and objectively. Leaving aside any thoughts about raising business rates thresholds being a nightmare for council funding, surely our friends in Number 11 have heard about the internet? Over a third of Councils in the UK now stream their meetings live (and have them available afterwards) and surely this is the way forward? There’s no editing so what you see is what you get plus, if you watch the archived version it’s possible to go straight to the bit of interest. Granted this is often the planning application that affects the viewer’s own backyard but more and more there are plenty of meetings that capture the imagination.

Just last week, some of our clients decided to webcast the counts and results of the local elections. With high viewership – over 1,300 live viewers in Woking – it’s clear that people are interested in seeing something more than a summary headline. OK, maybe it’s not as enthralling as the latest episode of Game of Thrones, but people still want to watch the mechanics of democracy in action. It’s not just local councils who can stream public meetings, of course. We’ve just had our second set of PCC elections and they appear to have been good for transparency within the police forces (terribly low turnout aside). Wouldn’t it be in everyone’s interests for some of their meetings to be available to the public? I can think of at least one police force about to be subjected to a rigorous review of its behaviour in the last 27 years.

Of course when it comes to analysis, debate and review there will always be a place for good writing. Especially now that we’re creating a generation who know about modal verbs and when to use them. However, we have always been reliant on visual stimulation and webcasting is a further evolution of satisfying that need.